Oh, what a beautiful Mornin’

Oh, what a beautiful day. 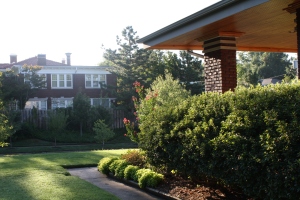 I felt like Curly from Oklahoma! this morning.  It was an absolutely heavenly, refreshingly beautiful 62 degrees.

It’s been a rough summer here in northeastern Oklahoma.  It’s been hot and dry, but the real killer has been the overnight low temperatures (and I use the term “low” loosely).  The summer of 2010 goes on record as having the second warmest overnight average low since 1905 –  74.8 degrees to be specific.  Three times in August the temperature never dropped below 85 degrees breaking the records for warmest overnight low temperature.  (The record holder goes to the summer of 1980, which anyone over the age of 40 will remember as the hottest summer ever).

Here’s a link to the National Weather Service for geeks like me who like to know the facts and figures.

Just to reiterate – it’s been hot. Really hot.  With absolutely no relief at night.  What that means for us Okies is that our air conditioners never stop running at night.   There is never a time that we don’t sweat in the car.  The minute you go out in the morning your curly hair turns into frizzed out troll doll hair.  Ok maybe that’s just me.  But you get the idea.

Not only has it been hot, it’s been dry.  The months of July and August were brutal for my gardens.  The astilbes are really unhappy.

And my poor ferns – well they pretty much gave up.

But the good news is that the weathermen say the worst is over.  A sigh of relief can be felt over the area.  The birds are singing louder, the dogs are more playful, and I didn’t have to put my hair in a ponytail first thing when I got home from work.  A collective exhale.  So if you’ll excuse me, I’m going outside to sit on my porch.  Peace, Kelly

Because he empties the dishwasher. Because he play

Things I love about June: 🌸Daisies, Cosmos, and

Evening walks with Daisy are the perfect antidote