There is a nasty bug going around. A lot of my friends have been bitten by it and it is highly contagious. I actually contracted the bug from my friend, Laura, and in return I infected my friends Carrie and Kristi, my mom, and even my delightful daughter. This disease is running rampant and what’s even worse is that once you are infected there is no known cure.

Symptoms that you might be Pinfected by this disease may include, but are not limited to:

Seriously though, how much do you love Pinterest!? I am completely addicted. It is such a great source of inspiration for me, and since I first got hooked on it a few months ago, I have pinned everything from OPI nail polish colors to scrapbook pages. And I’ve also tried fun things like fixing my hair in a messy bun, glittering letters to attach to Christmas presents, and buying skinny jeans (oh wait, that wasn’t really all that fun). 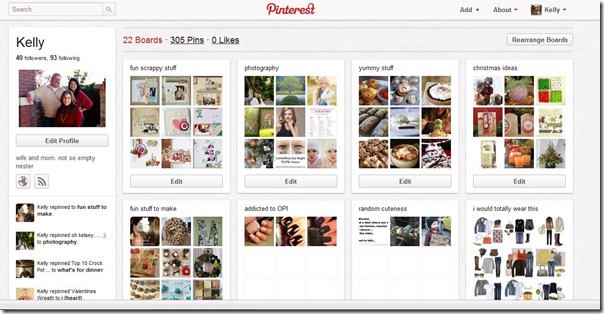 are you ready for this???

I know, so clever and original right??

So here’s my plan. Once a week I’ll pick something from one of my boards and try it out. It could be anything from a craft project to recipes or home decorating to makeup. Just whatever tickles my fancy that week. I’ll include the link to the original project and show you either how I followed the project to the letter or how I just used it as inspiration for something of my own.

{Either way, I won’t be plagiarizing another blogger’s post (i.e. reposting their step by step instructions or recipes) because that’s just uncool in the blogging world.}

The other thing I thought would be fun is this – if you’ve tried something from Pinterest that you would like to share, either 1) put a link to your blog post about it in my comments, or 2) upload a picture to your Flickr account and share the link. Once a month or so I’ll share some of your handiwork and we can all get Pinspired all over again! I think it will be very Pinteresting!

ok, just one more and I promise I’ll stop…

It’ll be the Year of Living Pinterestingly!