first of all, i would just like to thank you so much for all of your kind words regarding my skillshare class.  it was a labor of love and i am really proud of it. 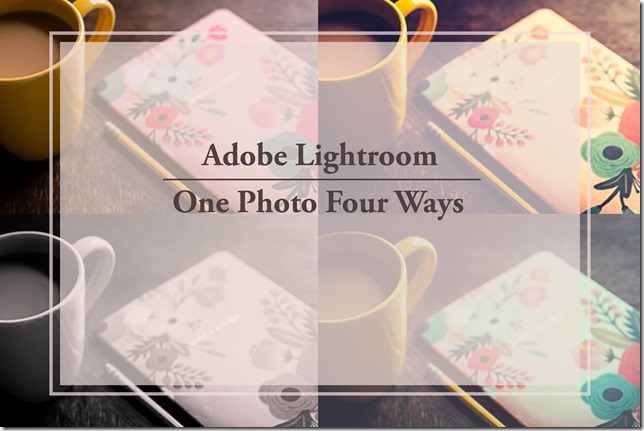 like i shared last week, the screencast tutorials were fairly easy to do.  but it was that intro video that just about did me in.

so just to give you a little backstory…this would have been about a month ago.  my screencasts were done and had been given the OK by the skillshare education team.  (yay!!)  all that was left was for me to do was film my two minute intro video.  which sounds easy enough right?

since i am off on fridays, that seemed like a perfect day to do my filming.  i had come up with a basic script based on skillshare’s suggested template.  the night before i had cleaned up my office since that’s where i had planned to film my video – you know…. creative space with pretty light…seemed to me a fitting place.  and then that morning, i got ready which included blowdrying my hair, putting on lipgloss,  AND curling my eyelashes.

because nothing says ‘please take my skillshare class’ more than having curled eyelashes naturally.

so anyway, i got my new DSLR camera (which has video recording capabilities) set up on a super ghetto-fabulous “tripod” {stack of books} and get my remote clicker thingy.  then i sat in my chair, cleared my throat, and began to sweat  profusely.  only after approximately 147 times of flubbing my lines and seeing a weird red light on my camera did i realize that my camera was not recording.  and after a half hour of researching the error message on the back did i discover that i didn’t have the right kind of SD card for video.  #awesome  #nowyoutellme

so i thought fine….no prob.  i’m a smart girl.  i can do this. i’ll just use my iphone instead. yes.  that’ll work.  #problemsolver.

so i regrouped, got a drink of water, then went back to my office and set up my iphone. 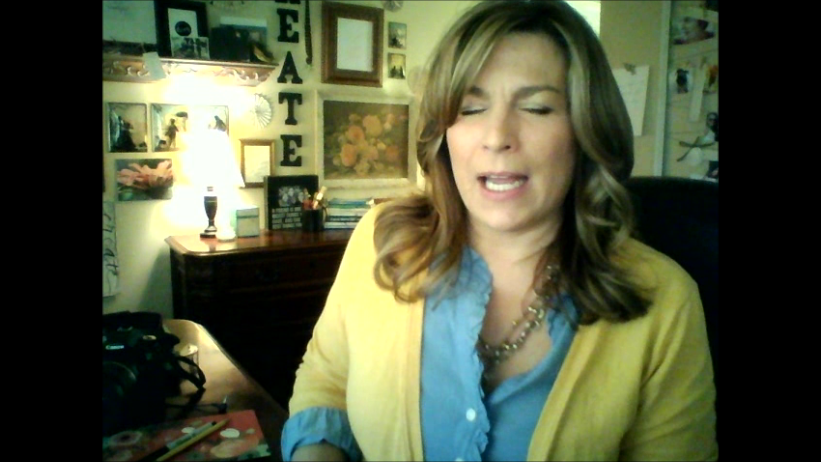 friends, i’m just going to tell you right now that trying to speak into a camera without sounding or looking like a complete idiot is sooooo way harder than it sounds.  and that is under ideal conditions.

sidenote::did i ever tell you that my neighbor across the street actually called to complain about riley barking once?

so here i am trying desperately to remember my lines and to not blink so much.  and it seemed like just about the time i would find my mojo, riley would start barking.  for those of you unfamiliar with the resonant bark of a basset hound, i’ll just tell you that it is an unmistakable bellow that can carry for miles.  or an upstairs bedroom.

once again, i put my filming on pause to bring the dogs inside.  which turned out to be an even worse idea because it was about the same time that the guy down the street walked by with his german shepherd.  both riley and daisy took turns standing at the front door HOWLING to share with me their immense dislike for this trespass.

so i thought fine, i’ll put them down in the basement.  except that in our 100 year-old house, there is an abandoned laundry shoot right next to my office and so my dogs whining about being put in the basement carried all the way upstairs and into my video.

by this time it was around 11:00 and i was so flustered and frustrated.  so i let the dogs outside again and proceeded to eat half a jar of nutella.  #stresseater

i wish i could tell you that i was finally able to film my intro video that day.  here is a chronological list of reasons why that did not happen: 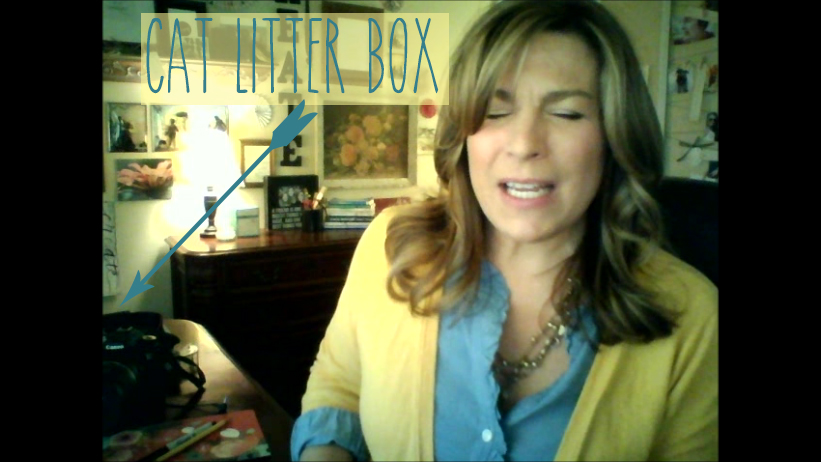 i could not make this up if i tried.

so tripp gets home around 5:15 and i am a complete, raging bitch.  and as consolation he took me out for dinner where i ate my weight in chips & salsa and drank two giant margaritas.

on saturday i was so scarred from the previous days’ filming disaster (plus i had a major headache from the margaritas) that i decided to take a break from filming.  later on sunday, tripp offered to take the dogs on a walk to get them out of the house.  i locked kitty up in my closet and i decided to just bust it out.  just grit my teeth and get this mother done.

i made a few minor tweaks to my script.  plus i decided to only film myself for a small part of the intro and include a slideshow as a way to show some of my work.  yes.  45 seconds of filming…i can do this.

and i did.  thank you jesus.  using a movie software, i joined my video and my slideshow and uploaded it to my class.  i sent my skillshare rep a note to let him know so he could review it.  and waited for the final go-ahead to publish my class.

monday morning i get an email….

These look great! Couple thoughts below, let me know what you think:

– The audio sounds different once you switch to the example images in the first minute of the introduction video, do you hear that? I’m not too sure what that is. No big deal if you can’t figure it out.

– The part at 1:20 where you say what the class title is and what you’ll learn, I think you could move that further up in the start of video. It’s super clear and tells whoever is watching the video what the class is about right away.

– Great seeing your examples in the Project Assignment tab. You could also post your own project in the Project Gallery as an example for students on how they should upload their work.

the sound problem he describes is because i filmed my video with my iphone, but recorded my slideshow narration on my computer. and it did sound weird.  #ihadhopedhewouldntnotice

back to the drawing board. again.

so monday night, tripp and i went for our usual run and i reworked my script in my head. then later that night i typed it out and went to bed dreaming about it.  tuesday morning i got up and got ready for work early.  with the dogs sounds asleep in the living room i was able to record my video using the recording feature on my laptop so that way it would sound the same as my slideshow narration.

finally after a dozen or so restarts, i was able to get one 45 second video of myself. 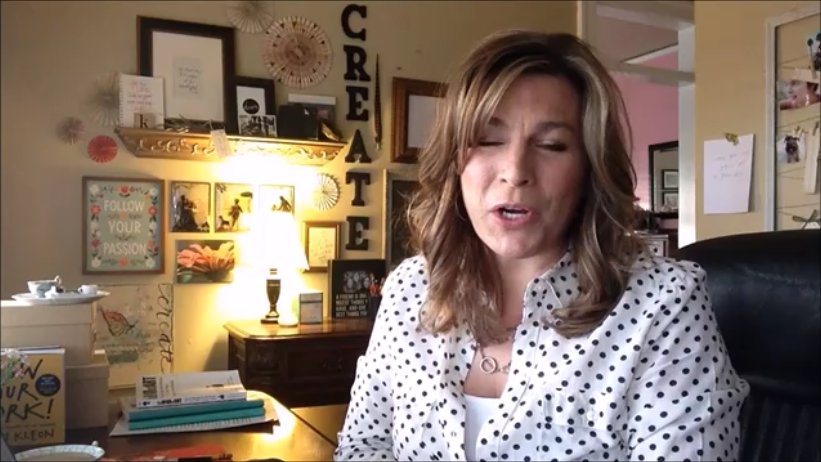 we’re not even going to talk about the crappy light, dark circles under my eyes, the giant wrinkle between my eyebrows, or the stress zit on my chin.  and please do not get me started on WTF is wrong with my mouth and the weird way my upper lip isn’t moving.

my friends this shit is not for sissies.  and my one big takeaway from this experience is that i will never be cut out for a career in newscasting.  or reality television.  which really shouldn’t come as a surprise.  but now a few weeks later i can at least laugh about it.  and do you want to know the one thing though that finally helped me to get through it?  i imagined that all of you, my sweet blog friends, were on the other side of that camera.  i pictured sitting in my office telling you about my class.  because you’re the reason i had the courage to do it in the first place.

thank you all again for your encouragement and support.  love, kelly