I remember exactly the day I fell in love with Tripp. It had only been a month since our first date, but I just knew there was something special about him. What’s funny is that we even had a first date at all, seeing as how the first time Tripp asked me out I totally shot him to the curb.

Tripp and I first met at the environmental laboratory where we both worked. I was a data clerk in the organic testing department and I spent my days entering data and numbering pages. Tripp was a GC/MS (Gas Chromatograph-Mass Spectrometer) operator who tested little vials of samples for various chemical compounds.

yes, I know…totally science nerds even then.  LOL

Tripp and I got to know each other quickly because we often had to work side by side in the data room – he analyzing samples and me gathering the data into reports. We both respected and admired the other’s work ethic and integrity and before long became friends. We also found that we had a lot in common like our addiction to Diet Coke, our love of country music (we were the only two in the lab that listened to country and routinely commandeered the radio away from the rest of the group),  and the fact that we both had hopes and dreams other than working at the lab.

We had a lot of fun together at work and within with our circle of friends. Everyday we’d all go out to lunch and hang out sometimes after work. Tripp and I naturally paired up and it wasn’t long before it became obvious to just about everyone that we were more than friends.

That’s when Tripp asked me out.

After that, it got really awkward at work. He started going to lunch with his guy friends and I went to lunch with my girlfriends. And gone were the innocent little flirtations and casual glances… I felt like such a dumbass. Here the man of my dreams was offering me everything I had ever hoped for and dreamed of, and I said no.

A month or so went by and gradually things became a little more comfortable. Tripp and I started joking around again and pretty soon our group of friends was having lunch all together again. I started to believe that there was still the slightest chance of hope for me yet and that’s when I commenced my subtle ‘Please Ask Me Out Again’ campaign. The first thing I did was put on my best damsel in distress look and ask for help with my reports – something I had never needed help with but I figured what the hell did I have to lose. And then I went straight for Tripp’s heart…I started asking him if he wanted a Diet Coke whenever I went to get one for myself.

I was encouraged that my shrewd plan was working when Tripp started hinted around about his pair of tickets to see Ricky Van Shelton at the EXPO Pavilion. He told me that he was thinking of asking his little brother, but wasn’t sure if he’d be able to go. On the outside I was cool as a cucumber saying, “Oh yeah? That sounds like fun.” But on the inside I was all, “I’ll go!! I’ll go!! {raising hand and jumping up and down}”. And then just like that Tripp said the words that I had been dying to hear, “Would you like to go with me?”

And I said yes.

Tripp and I were pretty much inseparable after that first date.  One day, maybe a month or so later, Tripp came up to my desk holding a little mug.  He handed it over to me and on the front was taped a little piece of printer paper where Tripp had written the words COKE MONEY in red Sharpie marker. Inside, he told me, was the change out of his desk and he thought that I might like to put my change in their too…that way we could share. And as he walked back to his desk I looked at my little cup and smiled to myself.

That’s the day I knew he loved me too.

Today Tripp and I are celebrating our 20th Wedding Anniversary. 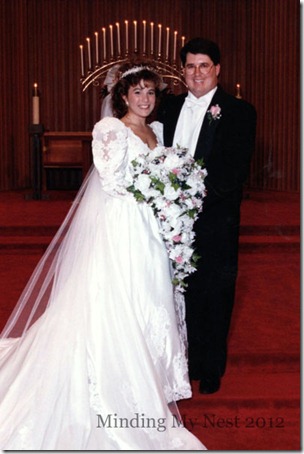 It’s so hard to believe that 20 years has gone by since we said our vows.  When I stop and think about our life over the two decades, those vows mean more to me than ever.

For better, for worse;

For richer, for poorer;

in sickness and in health… 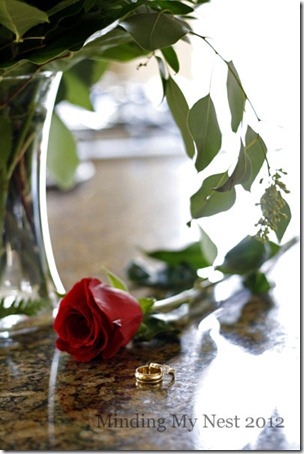 Thank you Tripp for sharing your life with me and making all my dreams come true.  I love you so much! Happy 20th Anniversary!