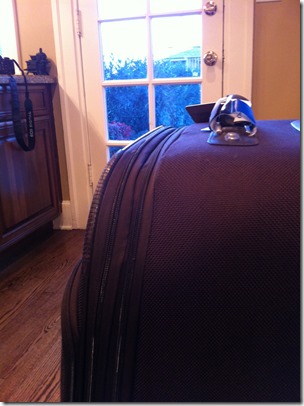 I mean, don’t get me wrong…nobody loves time at home alone more than me. But let’s just say that by Friday night I was talking the leg off of anybody and everybody who would listen. And that list includes my mom {thank you mom}, my daughter {thank you Kelsey}, and possibly even the lovely gal at Petty’s who kept nodding her head while she was scanning my groceries. Which that night consisted of a container hummus, a bag of fancy flatbread crisps, and 12-pack of Fresca. Because nothing says rockin’ Friday night at home like a tub of hummus.

I would just like to add here that since I gave up booze for lent, I have fallen off the wagon with my other favorite vice…diet soda…such a slippery slope….fresca is my kryptonite.

But before you start feeling sorry for me (I mean the whole Friday night hummus thing is pretty pathetic I admit…), it wasn’t all that bad. For starters, I only cooked once all week – this soup. Which I ate for lunch and dinner two days in a row and which now will be fine with not having it again until next fall. And you should also know that I enjoyed complete control of the upstairs television which did not one time include any of the following:

Although some people might not consider Lawrence Welk re-runs on PBS really that much of a step up from Finding Bigfoot. 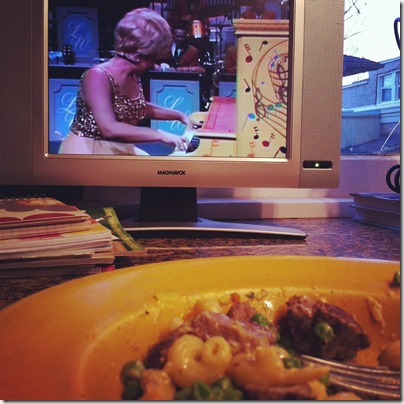 Anyway, the other thing that was nice about having the house to myself was that no one gave me a hard time about the mess in the kitchen. 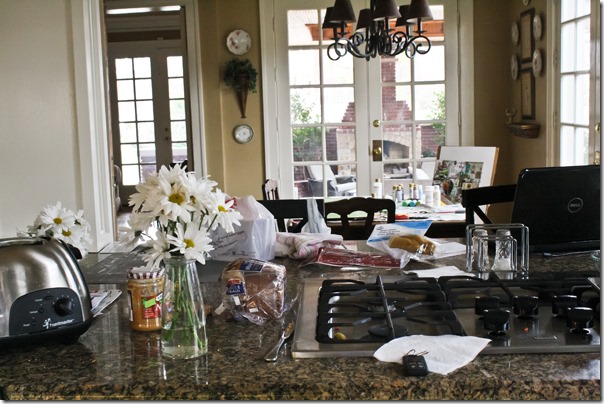 Instead of cleaning the kitchen I a) crackle-painted anything with a flat, paintable surface… 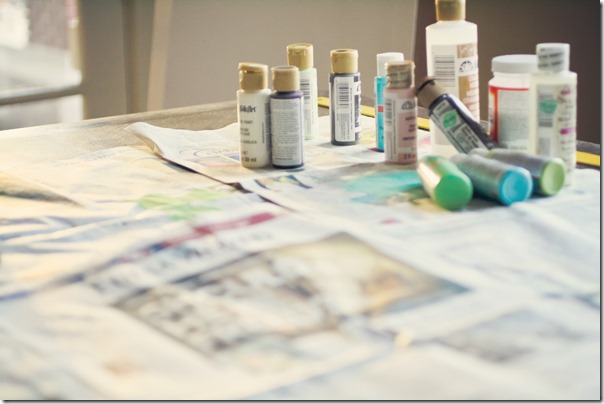 …and b) made this fun, spring deco-mesh wreath with supplies I bought from Amazon. 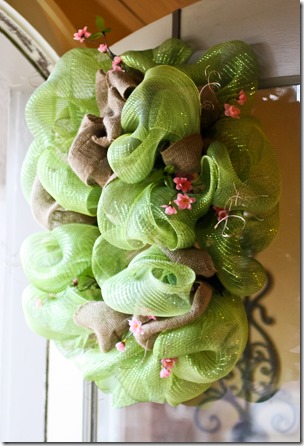 Probably gonna need a twelve step program my addiction to Amazon.com too before long.

Oh…and as you might expect…I took a lot of pictures.

I also cleaned house and emptied the cat litter by the way. Which I’m telling you about because I know that this kind of riveting stuff is what you read my blog to know about.

But lest you think my week at home was completely void of any entertainment whatsoever, let me just share with you the story of yesterday’s excitement. And I know I may be using the words ‘entertainment’ and ‘excitement’ loosely here, but you know I was home alone for eight days so it didn’t take much. Or I’m easily amused…take your pick.

First of all I’ll like to apologize to my Instagram friends who’ve already been tortured with the photos from this story.

And secondly, before I get started though I should warn you…there’s going to be a lot of talk about poop. Which given that this is MY blog should not surprise anyone I guess. And just as a sidenote… I swear that it was never my intention to be a blog about poop. But this is real life and shit happens right? (i’m so punny).

So anyway, Saturday afternoon I went shopping because I had a serious case of cabin fever. And this only matters to you because I was in my car for a better part of the day and it was for that reason that I know that my car was clean. So I got home around 5:00 that evening, and then the big storm came through and it was raining and thundering and I didn’t want to run out to grab a bite to eat and so I ordered a pizza. Which is all to say that my car was still clean when I went to bed that night.

Well so Sunday morning after having sprung (sprang??) forward I got up and went down to the basement to let the dogs out. And as I’m standing at my back door looking outside I notice that there is a lot of bird poop on the patio. And I mean A LOT of bird poop. But my coffee pot beeped signaling that it was ready, so I let the dogs in, grabbed my Sunday cuppa, and sat down in my chair in the living room to read the Sunday paper.

So fast forward about thirty minutes and I went back into the kitchen for a refill on my coffee. And I happened to look out the other back door and see my car and OMG. It’s covered in bird poop. And I don’t mean oh how funny, a bird pooped on my car. I mean OMG WTF happened to my car?? I seriously thought it was like something from the seven signs or a maybe a biblical plague. I mean, I don’t know how else to describe to you the extent to which my car was covered in bird shit!

Right then and there I decided that I had better not skip Mass as I had originally planned, and went upstairs to get ready for church. Well so about an hour later I come back downstairs in my church clothes and I open the back door to go out to my car. And I know this is going to sound so gross, which it was so gross, but I swear to you that I could hear the bird poop falling on the ground…like sleet – I promise I’m not making this up – and for a minute I debated about getting out my umbrella to avoid getting shat upon on my way out to the car. But I decided to make a break for it, and literally ran to my car. And thankfully, I didn’t get anything on me.

By the way…once again I will totally understand if you decide to unsubscribe to my blog.

Now the great part of this story is that I have been ignoring the ‘check wiper fluid’ message on my car for the past month, so I had no way of getting my windshield clean. But I persevered, and by peering out of the one clean spot, managed to get myself to church on time. I swear the people getting out of their cars were looking at my car like, ‘dude wtf?’ And I was like, ‘dude, don’t even get me started.’

I may have said a couple of extra Hail Mary’s during mass just in case.

Anyway, after church I went to the gas station and filled up (which normally my husband does, but as you know he was out of town) and I ran it through the car wash (ditto). 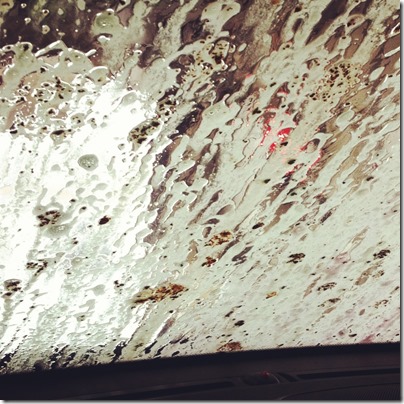 Then when I got home I parked out front, not in the back under the tree of the bird-shit apocalypse.  And then this is where the real excitement starts!

Once again, understanding that our respective definitions of ‘excitement’ may be a little different.

So I go upstairs to change clothes and I am in my bathroom which looks out over the backyard and is more or less at the same level as one of the big trees on which the birds had perched. Literally…there were hundreds of them. 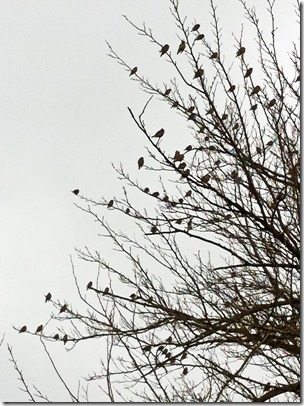 And getting a closer look, I realized that the birds were not sparrows as I had erroneously thought early that morning. In fact, I had never seen this kind of bird before in my life. It was about the size of a cardinal and had a crest on head like a cardinal, but it was mostly gray.

I was dying to get a closer look so I went back downstairs and got my camera and my zoom lens. Then I crawled out the window over our side porch and surreptitiously walked along the roofline to get a better view with my camera. That’s when I saw that this bird had a faint yellow tint to its underbelly. 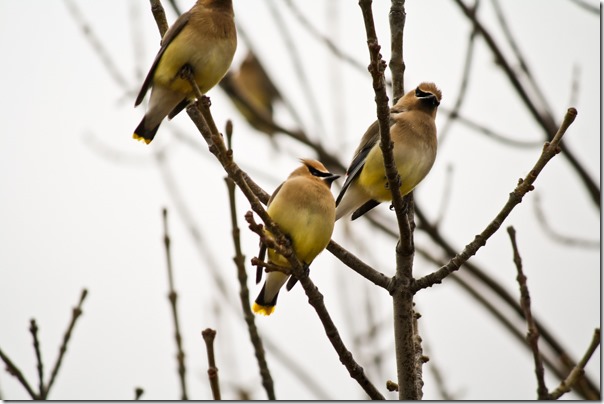 Plus it had a black mask, a little red blotch on the tips of its wings, and its tail feathers looked like they had been dipped in caution-yellow paint. 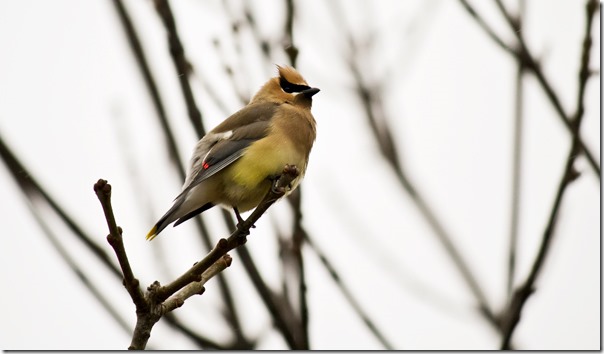 Well I got out my handy-dandy Field Guide to Birds of Oklahoma (seriously… I know…such a nerd) and discovered that in fact these birds were a migrating flock of Cedar Waxwings (not to be confused with its slightly larger cousin the Bohemian Waxwing of course). 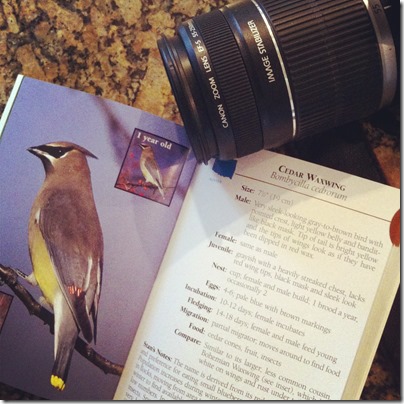 And because I know you’re dying to know as much about them as I was, here are some interesting facts about Cedar Waxwings.

So there you go. Exciting stuff huh! And then just like that, by Sunday night they had all moved on to greener pastures. Or more berries or whatever. Anyway, I’m sure I won’t remember them so fondly when it warms up and I am outside POWERWASHING MY ENTIRE BACKYARD!!

Don’t worry…I’ll spare you a picture of that.

And so with that, I think I will wrap up this blog post. {{you’re welcome}} My hubby is home for dinner tonight and I am actually looking forward to cooking dinner.  Hope you have a wonderful week friends!

Oh….and p.s….for my Instagram friends…Riley is feeling much better and is able to get up and down the stairs today.  He would like for me to tell you ‘thank you’ for all the kind words.  And I would too.