hello friends.  happy friday!  how are you?  raise your hand if you are as happy as i am that it is friday!

well so i was going to try to write a blog post about my week and try to weave it into some kind of halfway cohesive and/or humorous story.  but the problem is that i am really tired from having to get up to run at the ungodly hour of 5:30 a.m. when the temperature outside is slightly cooler than the surface of the sun.  it’s taken a toll.  about the most cohesive thing i’ve managed to pull off this week was finding a pair of earrings to match my necklace yesterday.  which the fact that i could even be bothered to wear a necklace at all is a major achievement in my book.

anyway, so instead of trying to do the impossible, i thought i might share some of the highlights from this week with in list form if that’s ok.

1) so speaking of highlights.  my girl got her hair done. 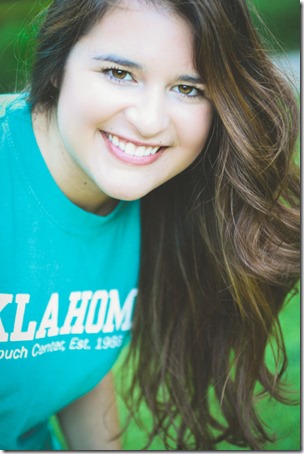 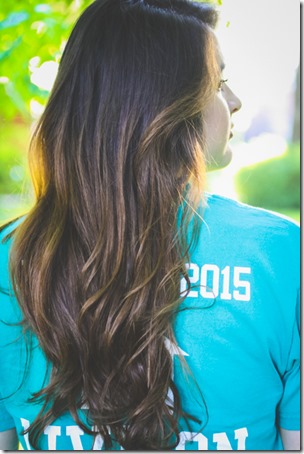 she did that ombre look that is so popular right now (which as my husband can now tell you is not in any way, shape, or form related to the word hombre.)  anyway, it was a pretty big deal for her since she had never colored her hair before.   and i was glad to see that she went to a professional.  i speak from personal experience here…let’s just say back in the day i may have gone overboard a time or five with the extra-strength ‘sun-in’ and/or at-home ‘frost & tip’ kits.

2) you might recall that a while back my girl and i were on a quest to find the ever-elusive double caramel magnum ice cream bars.  for the longest time it appeared that the wal-mart neighborhood market nearby was hoarding them.  well so on monday Kelsey and i made a target run.  and our target isn’t a super target, but they’ve recently done a huge renovation to include a bigger food section. it’s no reasor’s or petty’s that’s for sure.  but let’s say, for instance, that i need a cute navy blouse, garnier bb crème, paper towels,  AND a bag of individually frozen chicken breasts, i can now do all of that at target instead of making an extra stop at the grocery store.

oh and also…individually frozen chicken breasts are the devil.

anyway, so Kelsey and i are perusing the food aisles at our revamped, sorta-super target and we are next to the freezer section and guess what they have…caramel magnums, yes.  but wait!!  MINI CARAMEL MAGNUMS!!!  i’m sorry for yelling, but do you know what this means???  i no longer have to cut my caramel magnums in half and then worry all night about the caramel leaking out of the sides and making a mess in the freezer so i better go ahead and eat the whole thing.

thank you for not judging me.

and so now i bet you’re waiting for me to tell you about how wonderful these little mini’s are.  well i didn’t get them.  what?? i know…but see the problem is that i had to make a stop at the post office and omg, the utica square post office is a total time-suck.  and if my minis melted while i was waiting behind the guy with the 47 packages to ship and his tracking numbers and signatures and omg isn’t there somewhere else you can take this stuff?  well, that would have been bad.

and please don’t ask me why i didn’t just gone home first before the post office because i just now thought of that and now i feel like an idiot.  and besides…errand running for me is a carefully orchestrated exercise in time-management whereby you go to the furthest place first and then make your way back home with as little backtracking as possible.

hello my name is kelly and i am an overthinker.

3) i am still obsessed with my daylilies. 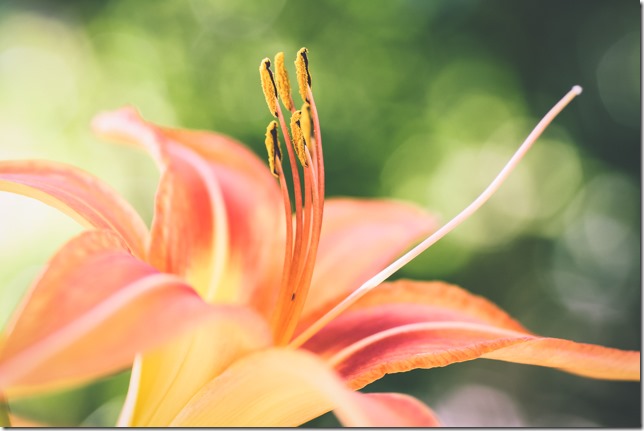 4) monday evening, after my beloved got home from his run, he came inside all sweaty and out of breath and said, ‘you need to get your camera.’  at which i couldn’t decide if i was scared or intrigued.  because sometimes tripp will say that and it’s something gross or something only a dude would like.  but as it turned out it was a bunny! 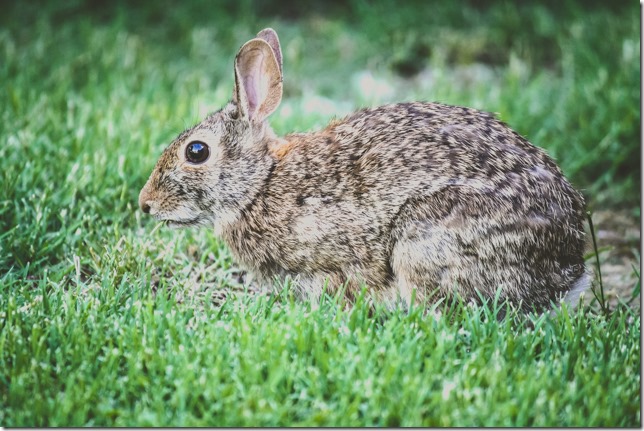 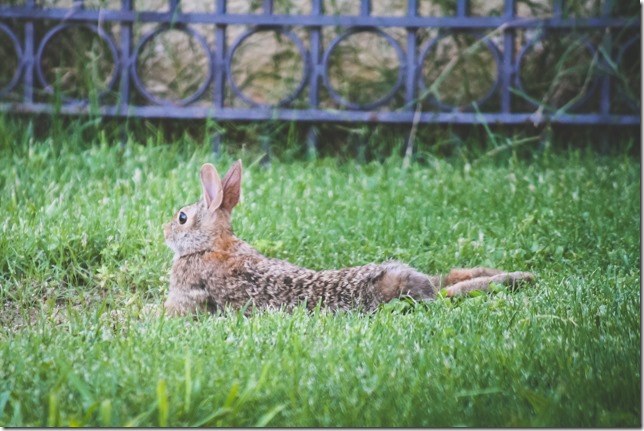 he didn’t appear to be too scared of humans and he let me get pretty close and snap about 147 pictures. 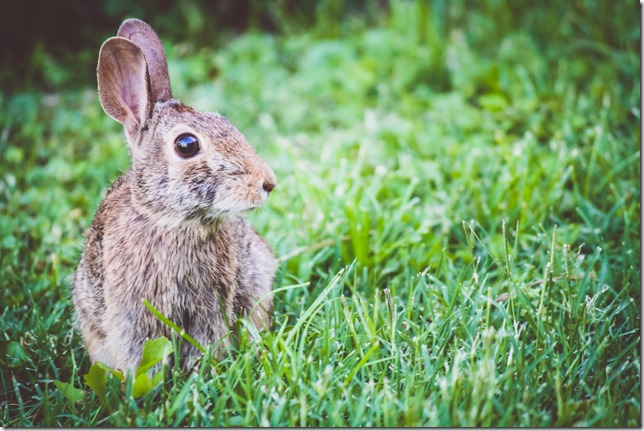 yeah I know…that’s a lot of pictures of one bunny, but living in the city we don’t get a lot of critters.

well that is unless you count the rat that i saw swimming in the pool last week.

i was out back and i heard a ‘kerplunk’ in the water.  i turned to see daisy standing on step and i walked over to see what she was looking at.  and omg it was a rat!  not a mouse!  a rat!  swimming with it’s little nose out of the water!! and yes, i screamed like a girl.  daisy was standing there in the water just ready to pounce.  riley was casing the perimeter of the pool which was the most activity i had seen out of him in a week.  so i go around to the back and get the pool net and decide i’m going to try to catch the rat…(don’t ask me what i was going to do if i caught it because I had no idea)…which i did.  but no sooner had i lifted the net out of the water when he climbed his way out of the net. at which i screamed again.

it was at this point that i promptly went in the house to call my beloved. but all i got was his voicemail.  shit!  so i cursed (some more) and screamed into the phone begging him to come home early.  then i went back outside just in time to see daisy DIVE into the water and catch the rat in her mouth.  omg for the love. and then she starts thrashing the rat side to side all while trying to tread water.  but then i guess daisy couldn’t keep her head above water what with all the thrashing so she was forced to let it go.  so she swam back to the steps.  and once she stopped snorting and sneezing girlfriend was pissed!  the rat was still in the pool, but i guess daisy put the hurt on it enough so that it couldn’t fight the current and it wound up in the skimmer basket. gross. which is where it was when tripp got home.  after that i went back inside and made myself a cocktail.  and all really know about the situation from that point on is that the big grill tongs and burger flipper were involved.

5) we are currently in the market for new big grill tongs and a burger flipper.  #prayforme

6) I am currently reading the book the weird sisters.  i really like it…although all the references to shakespeare are making me wish i had paid closer attention in miss arnold’s honors english class.

7) say what you want about BravoTV…but for all the shallow, self-adsorbed, vapid, petty ridiculousness that is the real housewives, watching chris and jacqueline’s autistic son finally be say ‘i love you mommy’ was one of the most redeeming moments of all time for that series.

8) on my run this morning i spied a this cool trumpet vine. 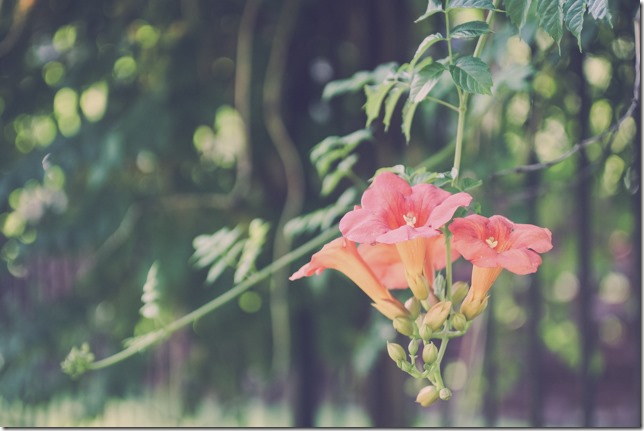 and well…i guess that’s about it.  now you are up-to-date on all the excitement around here.  which of course i am using that term loosely.  anyway,it’s friday and i’m really happy about it.  so if you’ll excuse me i’m going to sign off and enjoy it.